Anita Munnelly, a former PhD student, and I have just had a paper published in Neurobiology of Learning & Memory about which we are very excited and want to share!

The paper describes the results of two experiments from Anita's PhD thesis investigating the effects of prior instructed task awareness, and a couple of other methodological factors, on humans' transitive inference (TI) ability, which is considered a hallmark of human and nonhuman reasoning.

In a typical TI task, overlapping pairs of simultaneous discriminations are trained, such as A+B-, B+C-, C+D-, and D+E- (where “+” indicates reinforced choices and “–” non-reinforced choices), before novel combinations of stimulus pairs (e.g., AE, BD) are presented in a test phase in the absence of feedback. Now, the AE endpoint test pair may be solved without reference to the intervening pairs, and A chosen over E, since during training A is always reinforced and E is never reinforced. On the other hand, the BD non-endpoint pair have comparable training histories since reinforcement is made available equally often for choices of B and D during training. Despite this, selection of B over D is predicted because D was paired with E during training, which was never reinforced. We used Kanji script stimuli, as shown in the figure below: 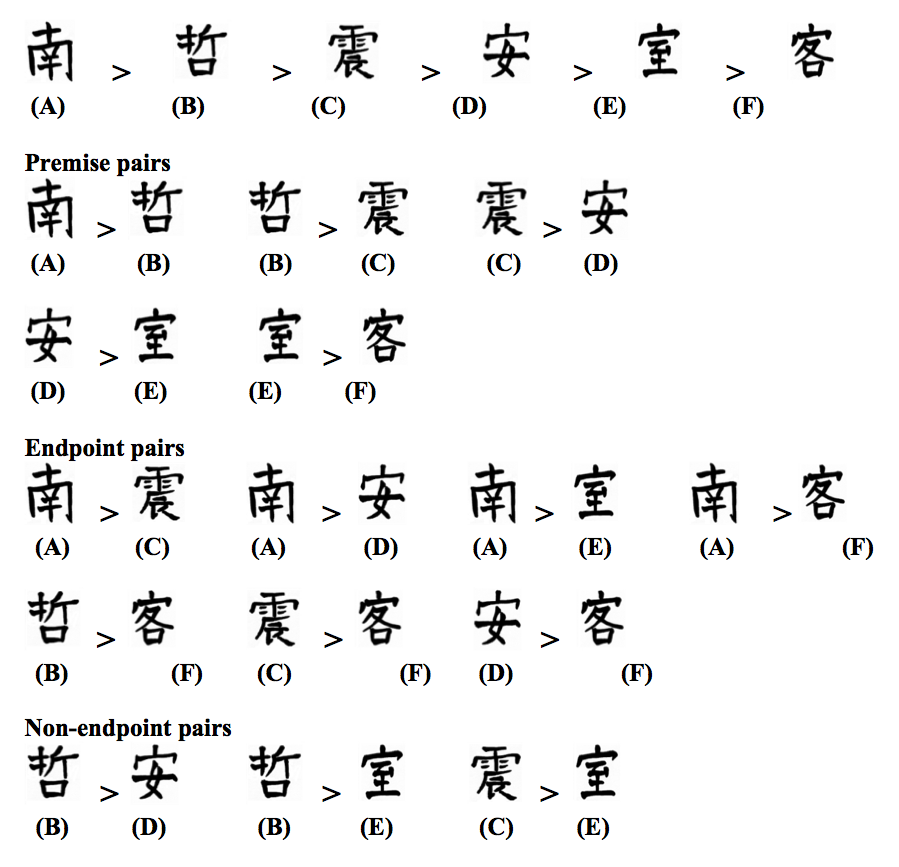 Anita and I were interested in the role of instructed awareness in facilitating TI, so we explicitly informed one group of participants that they should pay close attention during training as the stimulus pairs reflected an underlying hierarchy (i.e, A+B-, B+C-, C+D-, and D+E-), while another group were not given this instruction. We also employed repeated training and testing exposures, so if someone didn't meet criterion at test, he or she was re-exposed to the training and testing sequence a maximum of two more times. This allows for consistent correct (predicted) and incorrect (unpredicted) performances to emerge; it's also an approached based on functional-accounts of relational memory which emphasise that a prior relational learning history may be both necessary and sufficient for novel behaviour, such as that seen on tests for TI, to emerge. Another factor we manipulated was presenting the critical BD probe trials at an early stage of learning to chart the time-course of emergence of this relational ability.


So, a mixed bag. Instructing participants that the stimuli formed an underlying hierarchy didn't boost test performance, although any instructional effects may have been mitigated by the predetermined exposure and mastery criteria we employed. Also, the present findings were obtained with a relatively small sample size; further research with larger samples sizes is therefore necessary to replicate the findings and determine the size of any possible effects.


Here's the references and a link to the PDF:

Munnelly, A., & Dymond, S. (2014). Relational memory generalization and integration in a transitive inference task with and without instructed awareness. Neurobiology of Learning and Memory, 109, 169-177.